On the 15th of May 2020, CRESTING ESR (Early Stage Researcher) Martin Calisto Friant presented his latest research at the Second Utrecht Degrowth Symposium: From Circular Economy to Circular Society.  Martin co-organized the online event with other members of Ontgroei (the Dutch Degrowth Platform) and obtained funding from Utrecht University’s Circular Economy and Society Hub.  The forum led to thought-provoking discussions on what a degrowing circular society can look like and how it can be achieved from the perspectives of practitioners and academics alike.  The event had over 600 attendees from various sectors including businesses, governments, academia and NGOs.  Speakers included Dr. Kersty Hobson (Cardiff University), Ilektra Kouloumpi (Circle Economy), Joey Hodde (De Ceuvel), Dr. Socrates Schoutens (Waag), Martine Postma (Repair Café) and Dr. Ernst Worrel (Utrecht University). 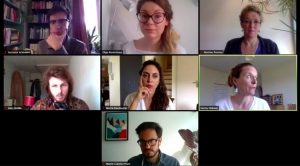 Martin’s presentation introduced the circular economy concept and its many related concepts in a historical perspective.  He first discussed the current interpretation, expectations and main challenges of the circular economy concept.  While the idea is viewed as a cure to many of the socio-ecological problems of the 21st century (e.g. resources scarcity, climate change, unemployment etc.), it still faces major obstacles to deliver on those expectations.  Martin’s research evidences that many CE proponents fail to build a holistic approach to the social and political implications of a circular future and thereby do not address issues of redistribution of power, wealth, knowledge and technology.  Moreover, they often assume that economic growth can be reconciled with environmental degradation despite the mounting evidence proving the contrary. Circular economy practices that seek to increase profits and GDP growth while reducing environmental harms thus often lack systemic validity and can lead to increased, rather than reduced, environmental impacts.  Martin argues that the above issues mean that current circular economy discourses are often vague, depoliticized and uncontroversial forms of “greenwashing” used deliberately by states and corporations in order to appeal to a wide range of actors.

Martin’s research also finds that, when looking at the circular economy from a broad historical perspective, one can see that the concept is actually much older and diverse.  Indeed, the concept has many interrelated ideas from the Global north and south alike such as Doughnut Economics, Buen Vivir, Gandhian Economics, Degrowth and Steady-State Economics.  Many of those concepts deal with the lack of social perspective and systemic validity of current circular economy approaches.  Overall, Martin finds that the plurality of CE-related visions through history can be distinguished in two broad sets of discourses: circular economy and circular society discourses.  A Circular Society defines discourses with a vision of circularity where not only resources are circulated in sustainable loops, but also wealth, knowledge, technology and power is circulated throughout society in fundamentally democratic and redistributive manners.  Circular economy discourses, in contrast to this, focus on sustainably circulating resources alone.  Watch the full recording of the presentation in order to learn more about the history and different visions of a circular future: https://www.youtube.com/watch?v=cL-b7V7MEE4

You can also access the paper on which the above presentation was based through the following link:  https://www.researchgate.net/publication/341453444_A_Typology_of_Circular_Economy_Discourses_Navigating_the_Diverse_Visions_of_a_Contested_Paradigm